The Small Carpathians just over Bratislava provide a perfect place for a walk. The length and difficulty is completely upon yourself. I try to prove why it's worth of it to have a walk across the forests and meadows of Small Carpathians. This is what I observed during Sunday morning walk.

Low grey clouds were hanging over Bratislava. Occasional showers, last gasps of leaving winter. In spite of that I decided to take a walk on Sunday afternoon. And it was worth of it. I observed first Blackcap of the year. I found Coal Tits on two different places. And enjoyed bathing Blackbird and House Sparrows. Every day is a fine day for birding. Sparrows, Blackbirds or Hooded Crows deserve our attention too!
No comments:

Few free hours between two bike delivery stints in Bratislava. Why not to have a ride to nearby Austrian fields. When you are in Bratislava you needn't go into the Small Carpathians, along the Danube or visit Morava floodplain. Even the flat landscape to the south from Bratislava offers fine opportunities for a bike ride and even a birder can have an interesting sightings. My route went through Kittsee across Pama to Gattendorf. Then I turned to the southeast direction along Leitha River to Zurndorf and then another 90° turn towards Deutsch Jahrndorf. From Deutsch Jahrndorf I rode back to Pama and have reached Bratislava across Kittsee and Petržalka. It's approximately only 50 km all together with the start and end in the Bratislava city center. Bike trails in Austria are well marked so it's easy to find your way.

My main intention was to find out if there are any flooded fields or meadows after the winter. These wet habitats are attracting wader bird species during the spring migration. And sometimes even flocks of gulls or ducks. I had a nice spring feeling while I was riding between Kittsee and Pama. Skylarks and Crested Larks were singing in the skies, European Hares were running all around. I was hoping to observe my first Marsh Harrier of the season, but only few Kestrels and Common Buzzards appeared. Next to the Zurndorf I turned my eyes up to the sky and spotted 3 White-tailed Eagles soaring really really high. On the road to Deutsch Jahrndorf I finally found some flooded fields. Few hundreds of Lapwings accompanied by Starlings were enjoying these pools of water. I observed my first Eurasian Teal of the year that was swimming in the flooded field with Mallard couple. I moved towards Deutsch Jahrndorf and another flooded fields and meadows appeared. Three hunting Great Egrets, another flocks of Lapwings, resting gulls but unfortunately Lapwings remained the only wader species to be observed that day. I was running out of the time because of my afternoon bike delivery job, but I managed to spot Red Kite flying over the fields close to Pama.
No comments:

I was just starting my day of bicycle delivery service in the streets of Bratislava center. I entered wrong courtyard by mistake (I was supposed to go to the neighbouring house). Surprisingly I found Sparrowhawk on the ground as it was tearing feathers from caught Feral Pigeon. I took few photos, short video and I went to make my delivery. It was short but amazing encounter with the beauty and cruelty of nature in the urban environment. 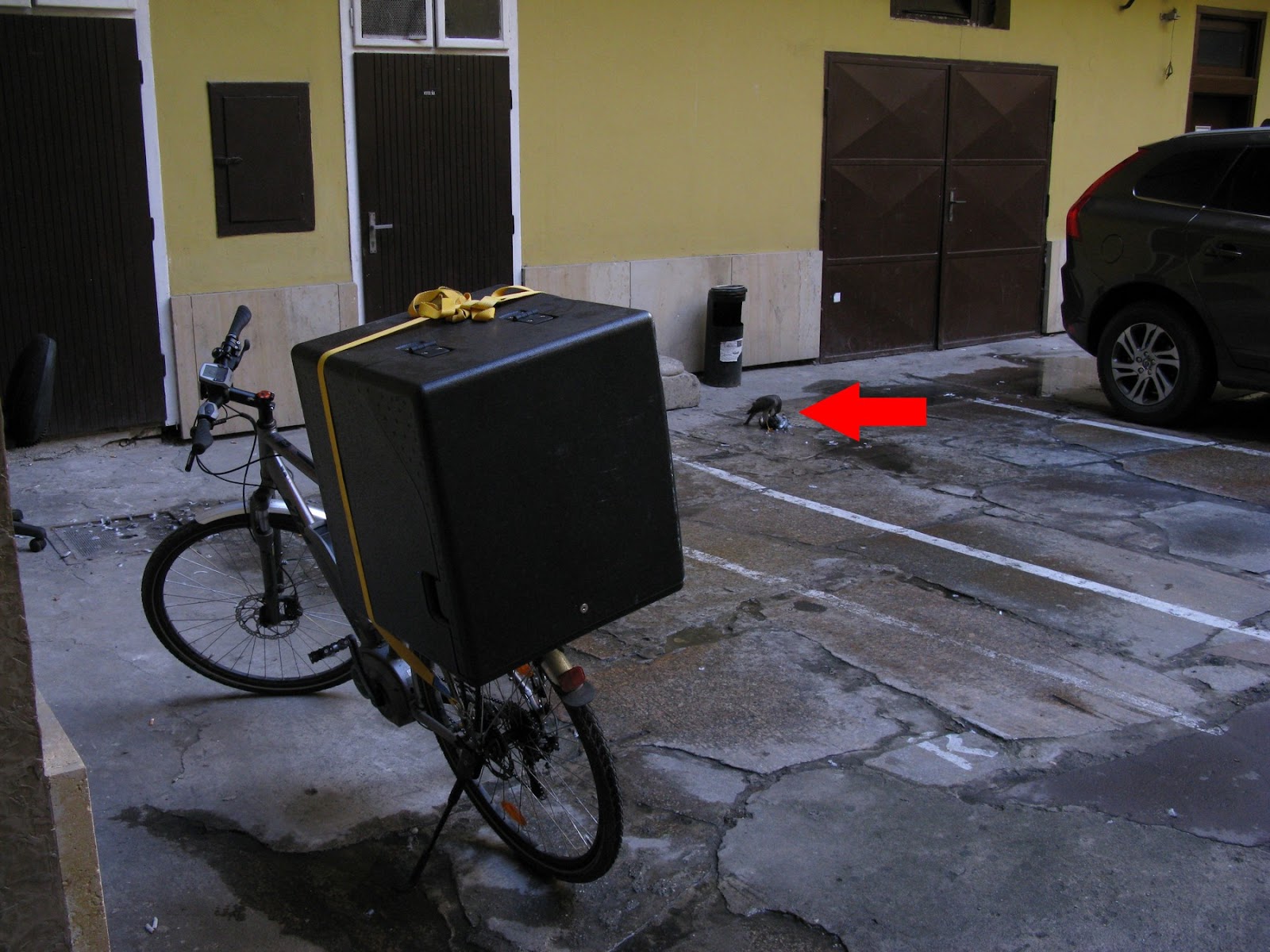 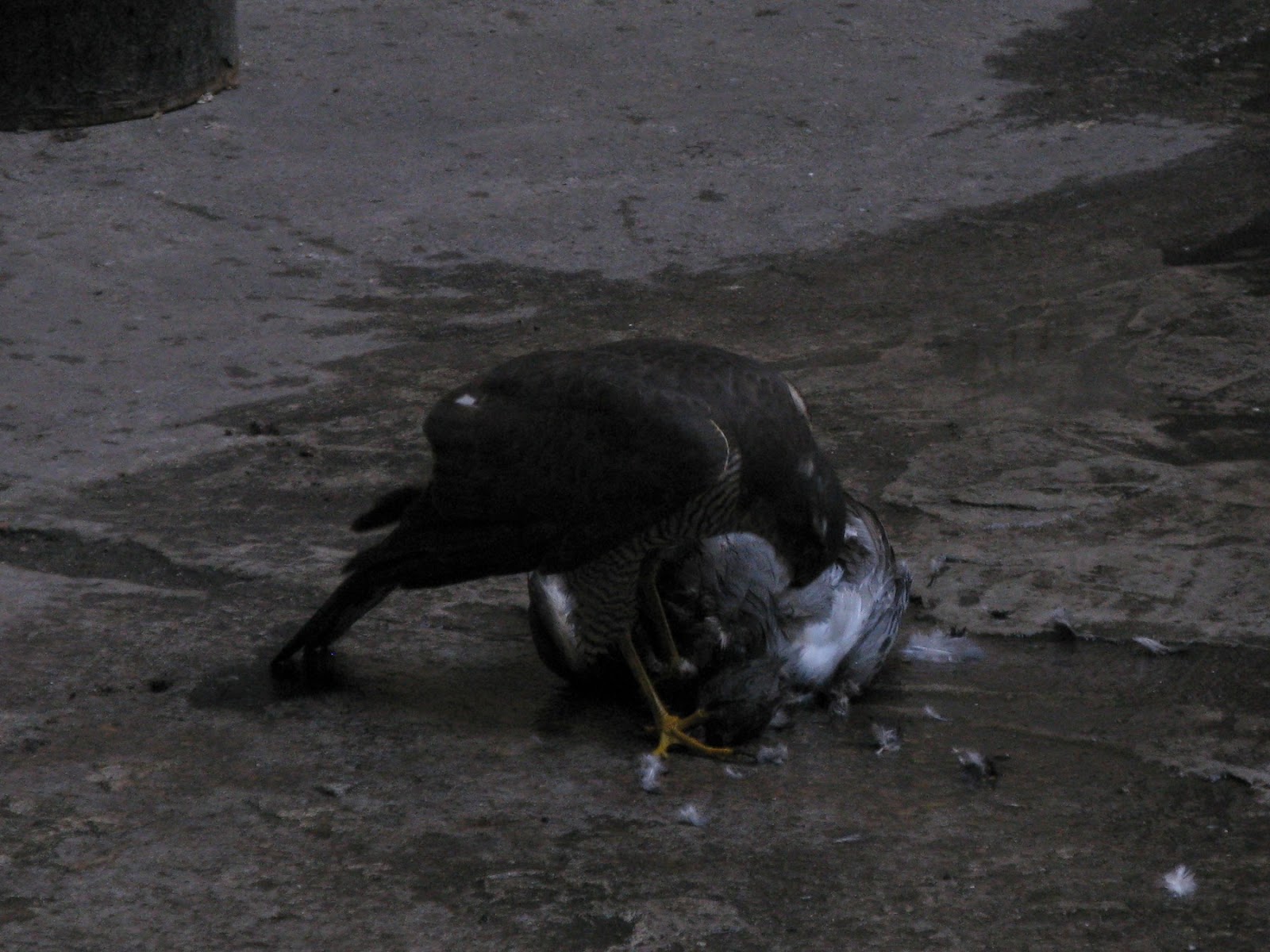 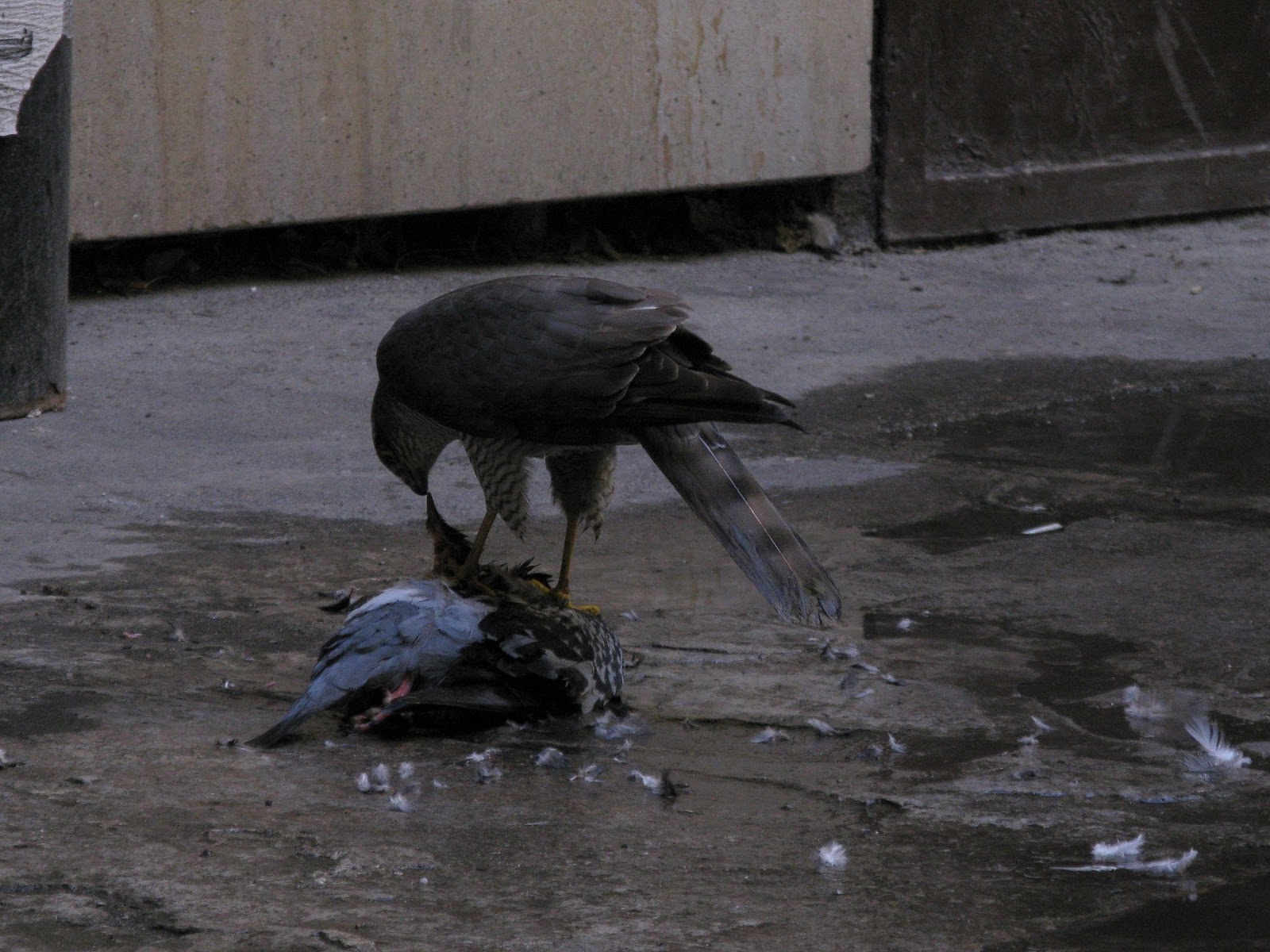 Last Saturday of January is a date, when annual census of wintering White-tailed Eagles on Slovak section of Danube is taking place. I was one of few tens of volunteers who decided to spent 5 hours on the assigned observation point somewhere between Devín and Štúrovo. After previous years' censuses that I spent further down the stream of Danube below Bratislava, this year I was assigned to the point in the outskirts of Petržalka. It is less than 1,5 km from the nearest blocks of flats and less than 1km away from the sewage plant. 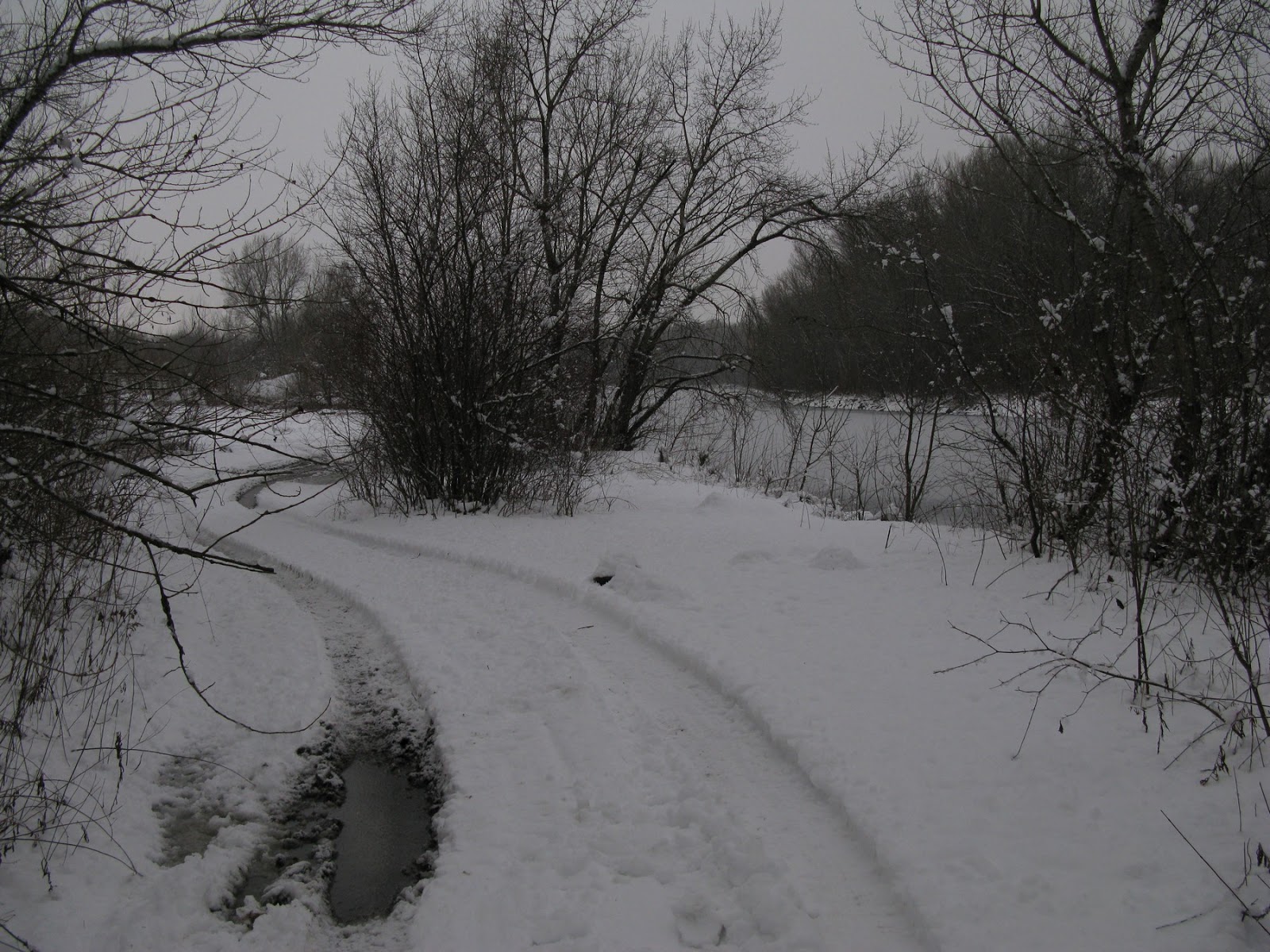 It was snowing in the morning. Clouds were grey and low. Not the best conditions for birdwatching. Despite the fact, one of the first observed birds was a Kingfisher (Alcedo atthis). In following 1,5 hour I observed its several flyovers. 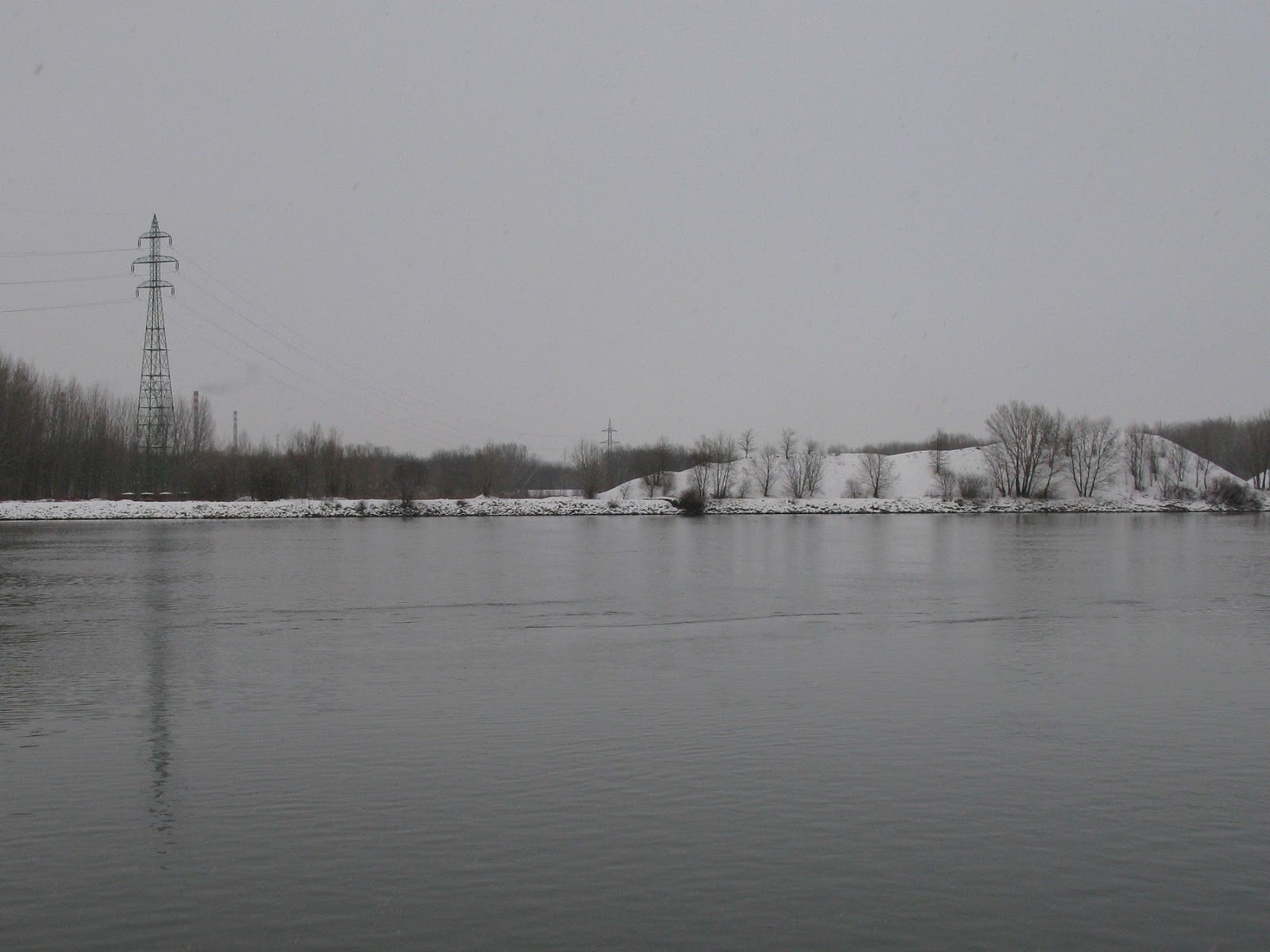 High voltage powerlines, distant chimneys of the Slovnaft oil refinery, mounds of gravel. One would say that nothing special could be seen here. 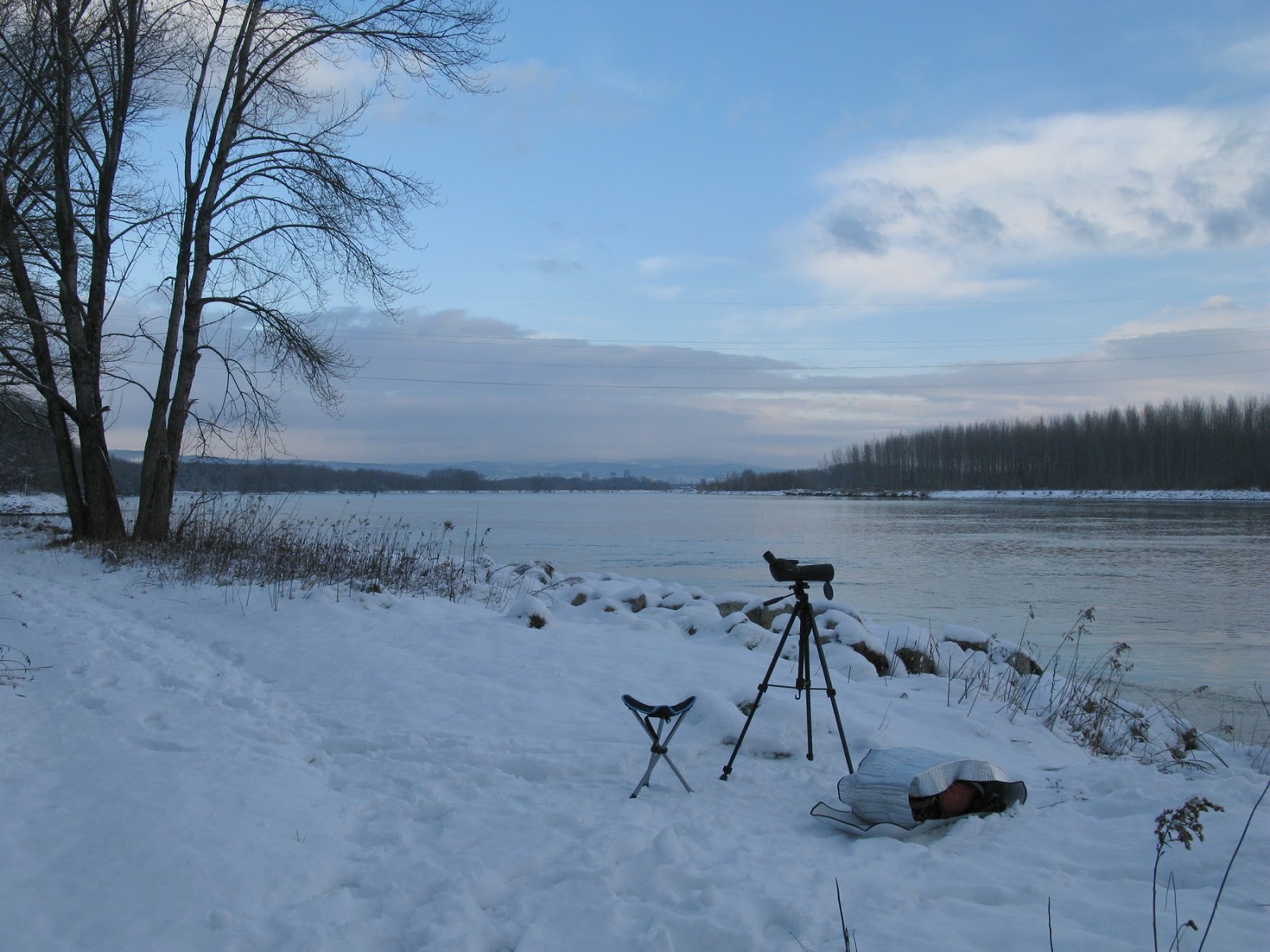 The skies were slowly clearing. On the surface of Danube were flocks of Tufted Ducks (Aythya fuligula), Common Goldeneyes (Bucephala clangula) and few Great Cormorants (Phalacrocorax carbo) were diving for fish. 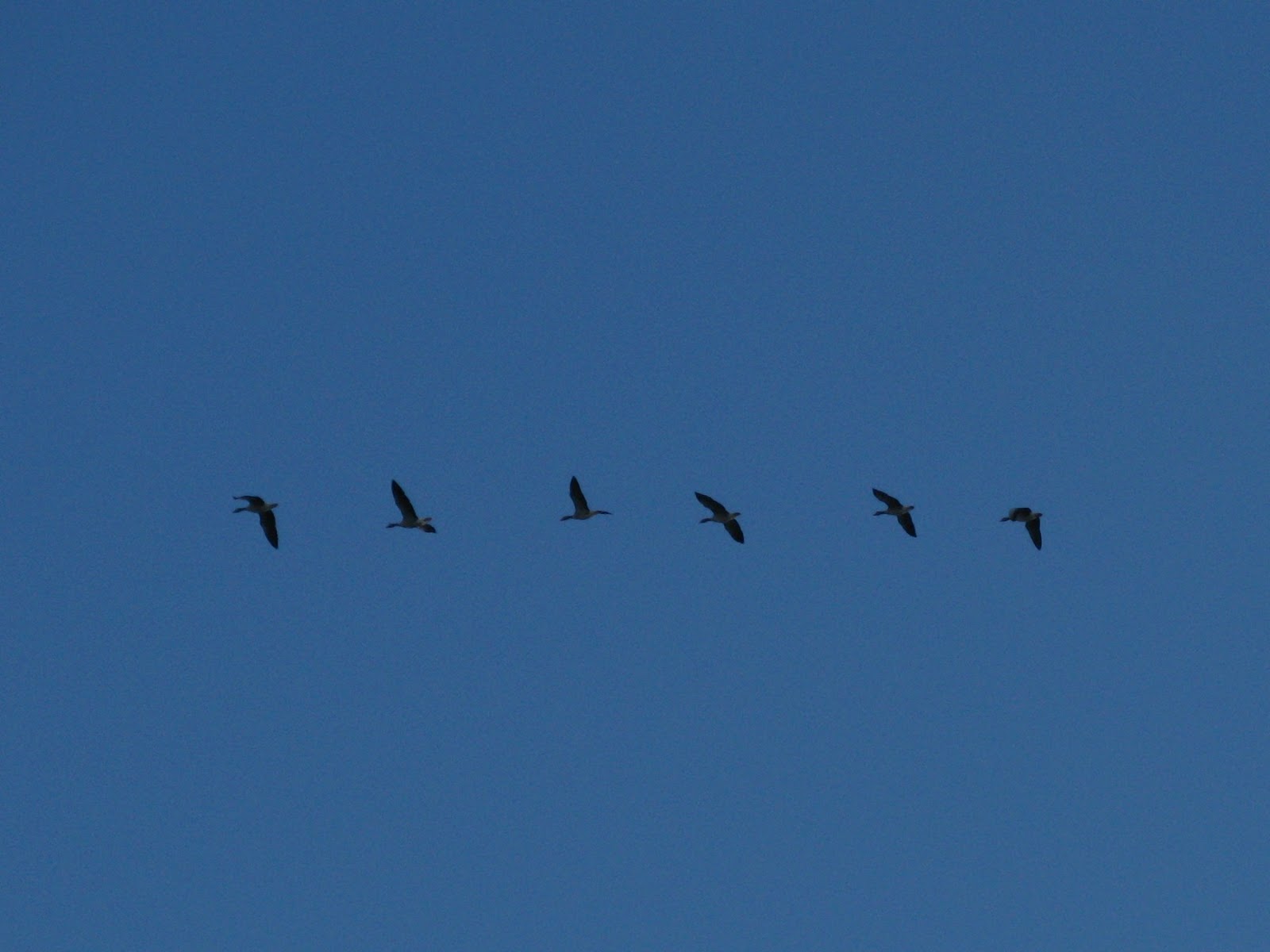 Several Geese (Anser sp.) flocks were flying in the heights. Danube is an amazing highway for migrating birds. 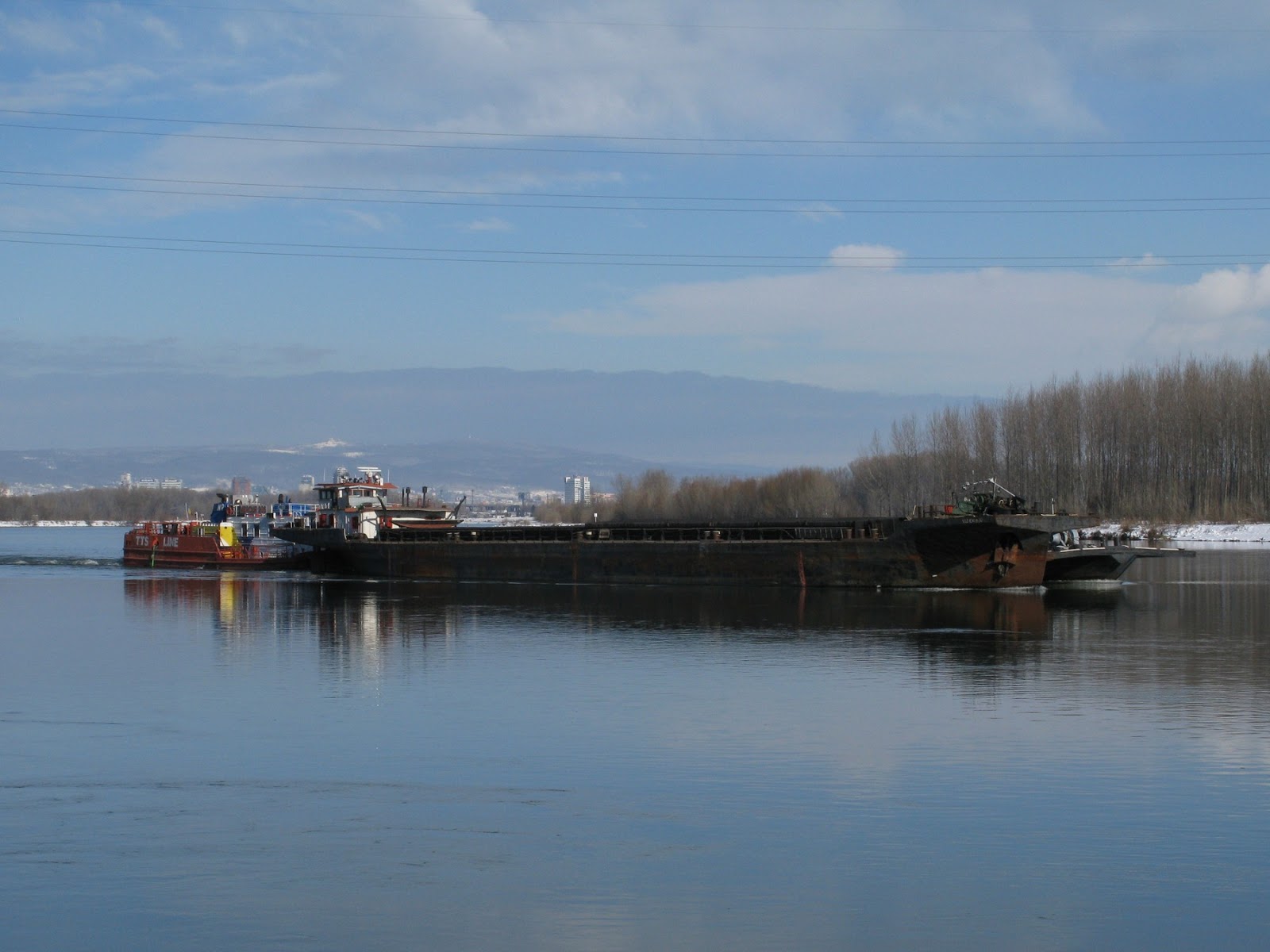 It is a highway for cargo ships as well. 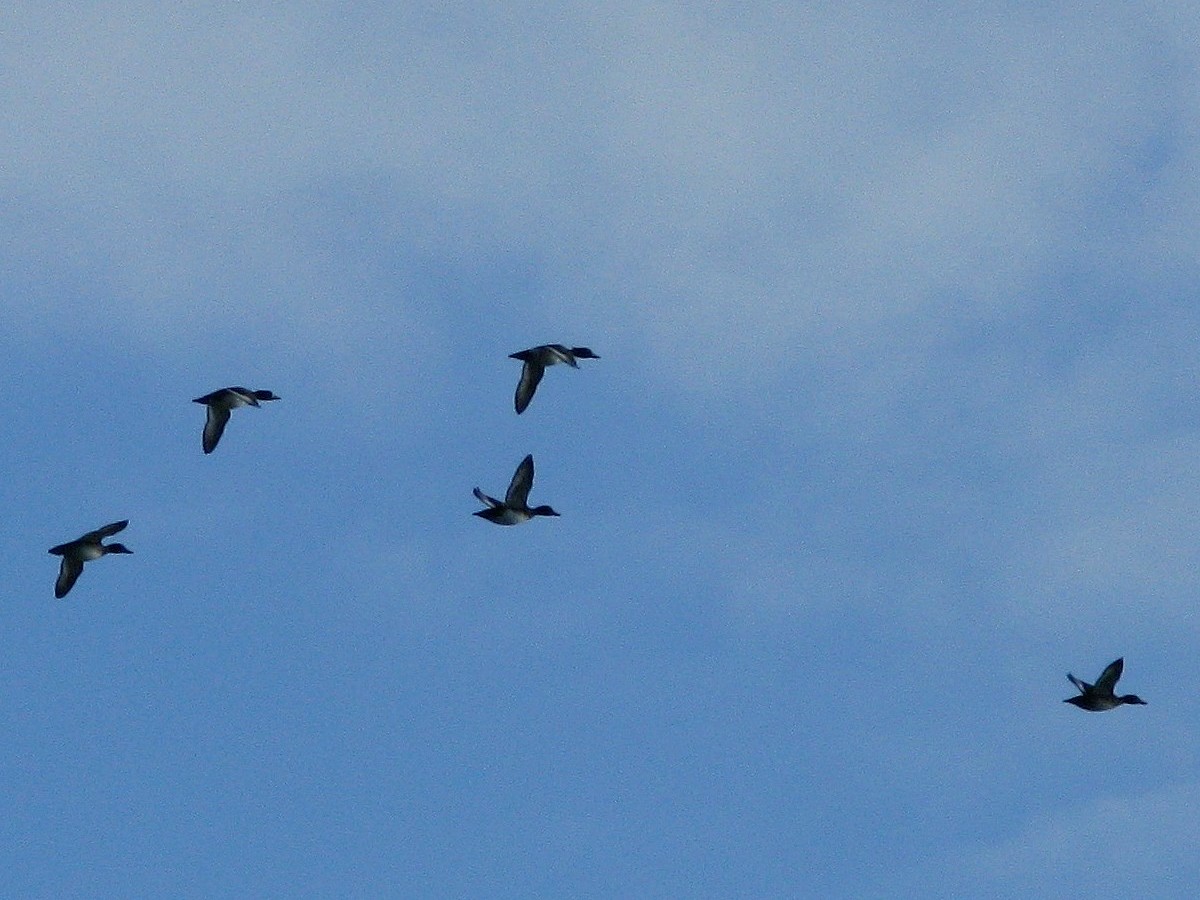 Tufties and Goldeneyes were flushed several time by the passing ships. 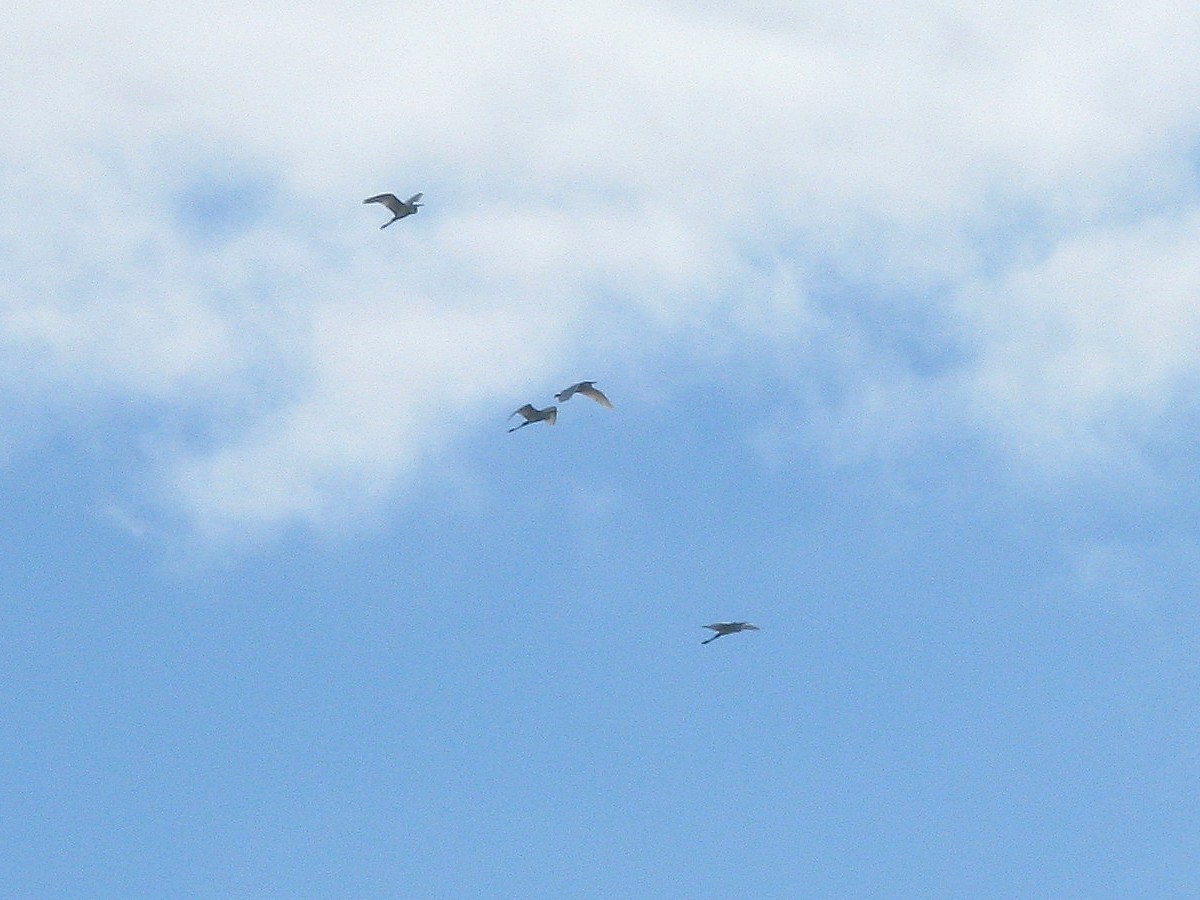 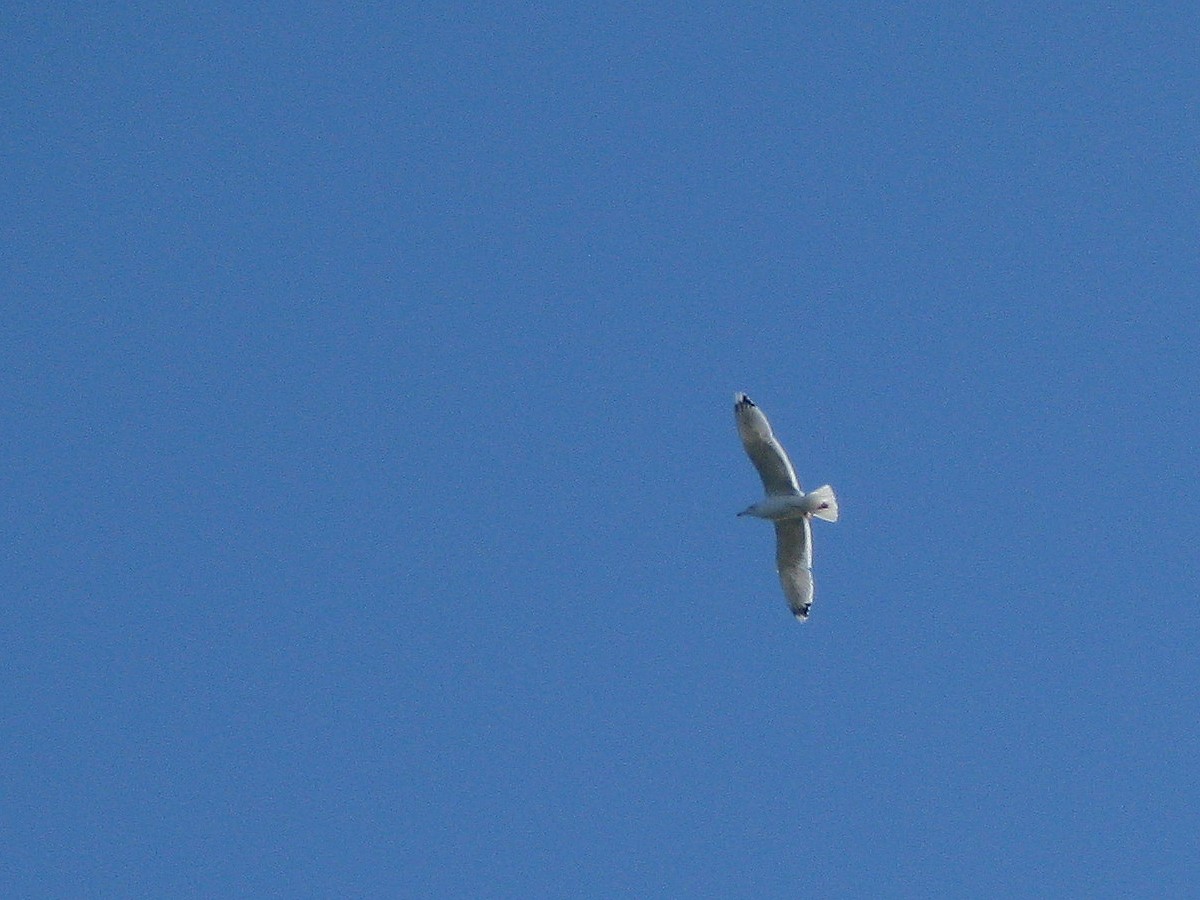 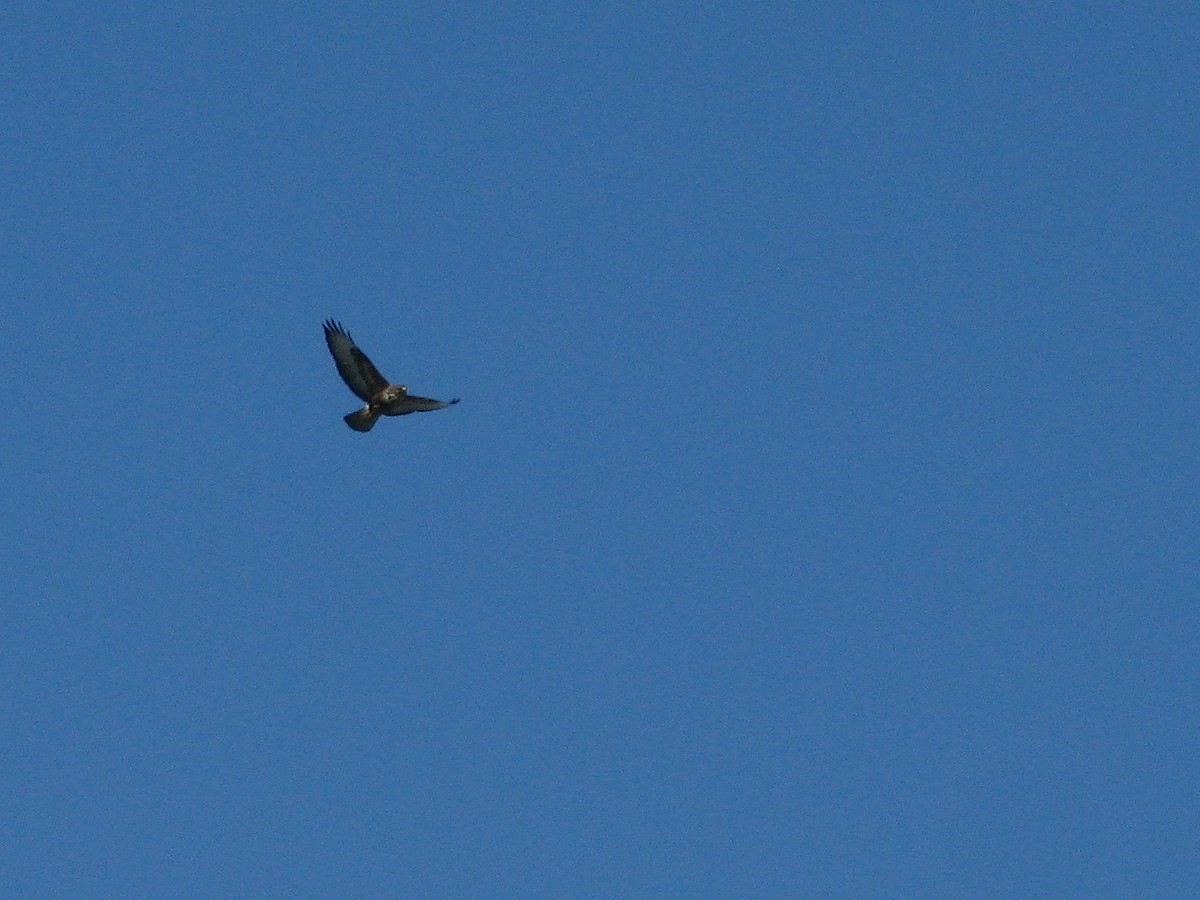 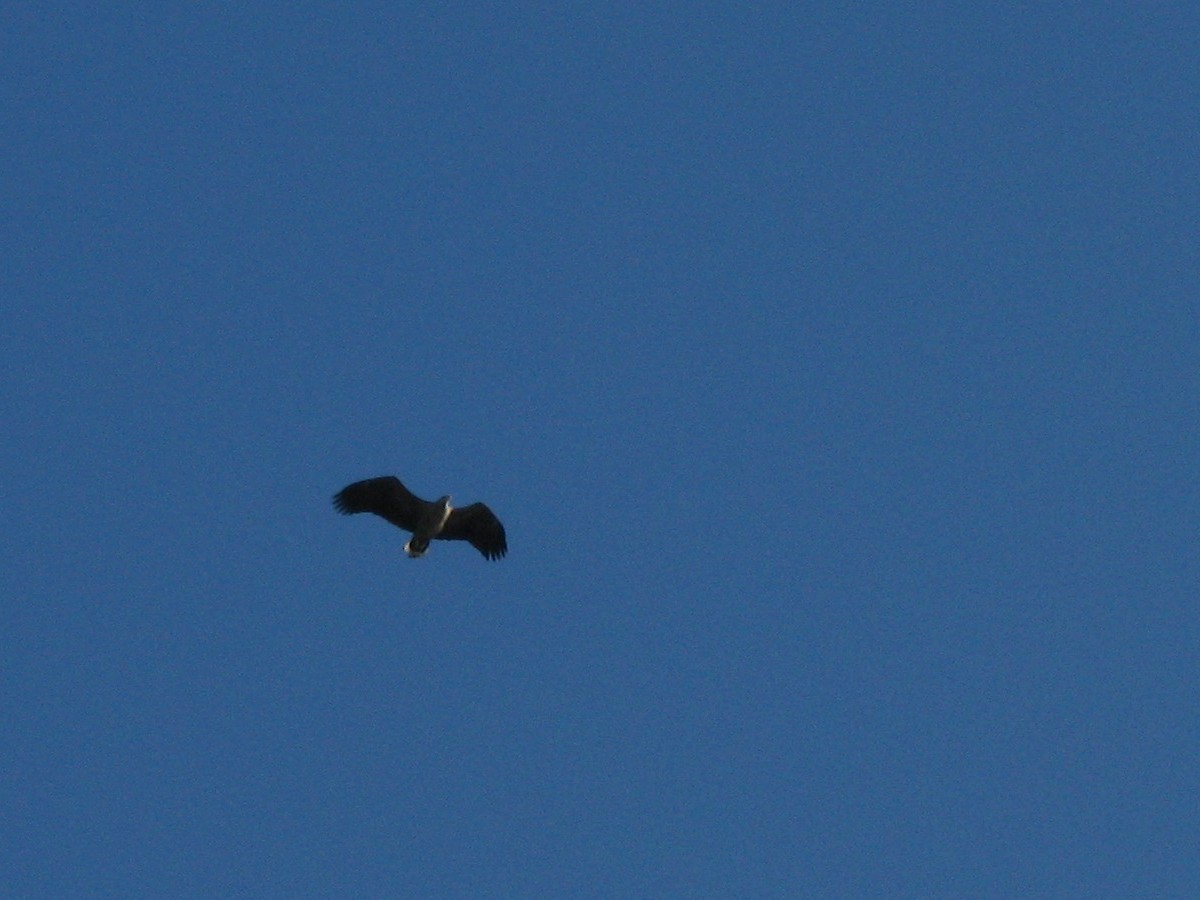 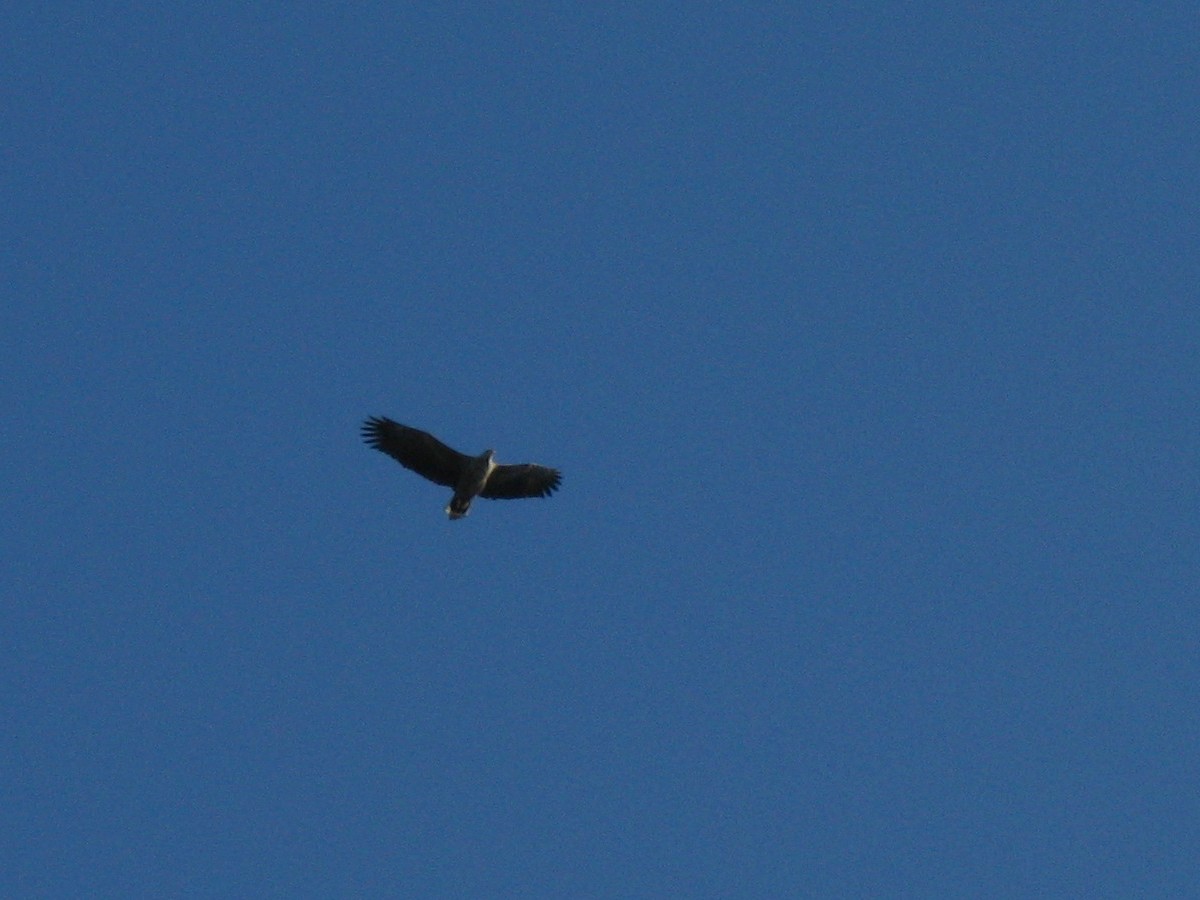 After almost 4 hours of waiting there was finally a White-tailed Eagle (Haliaeetus albicilla). It was flying towards my observation point. 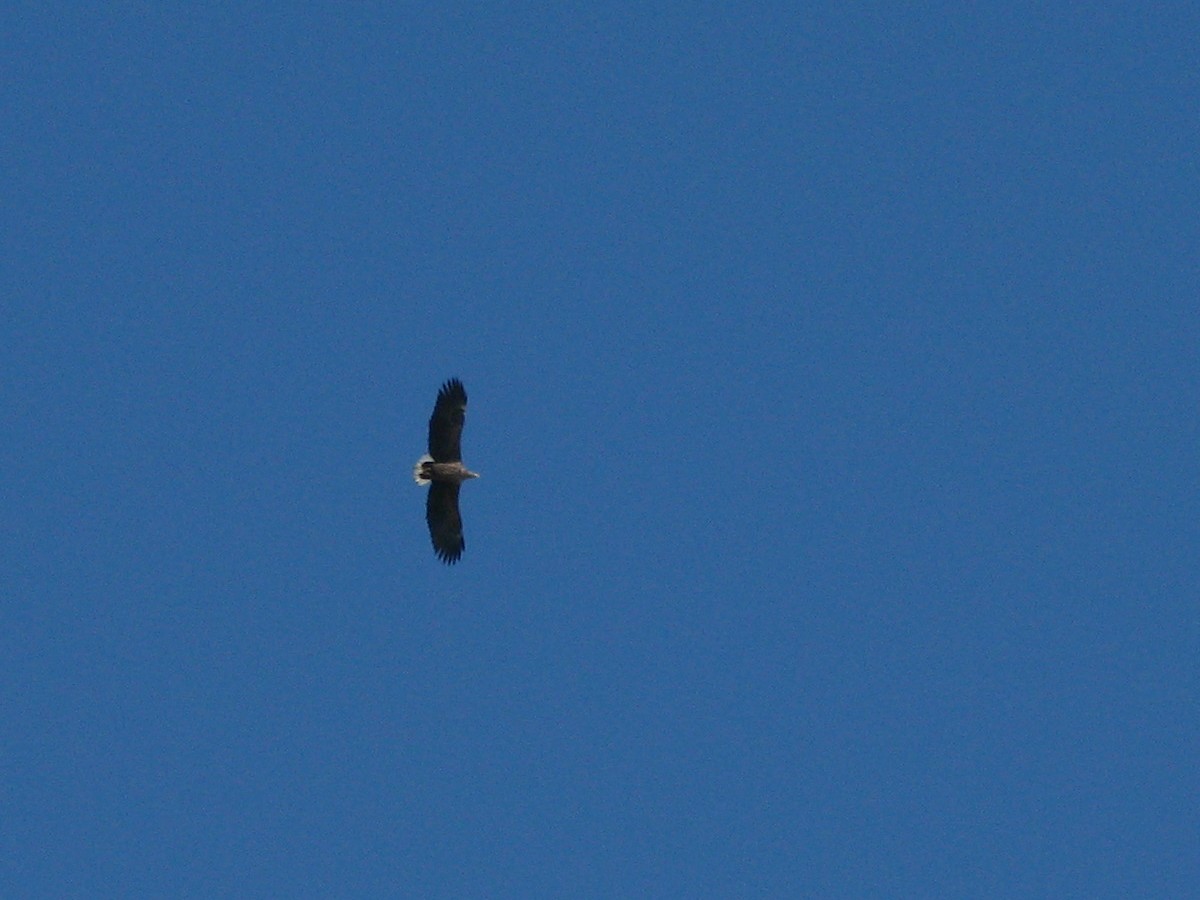 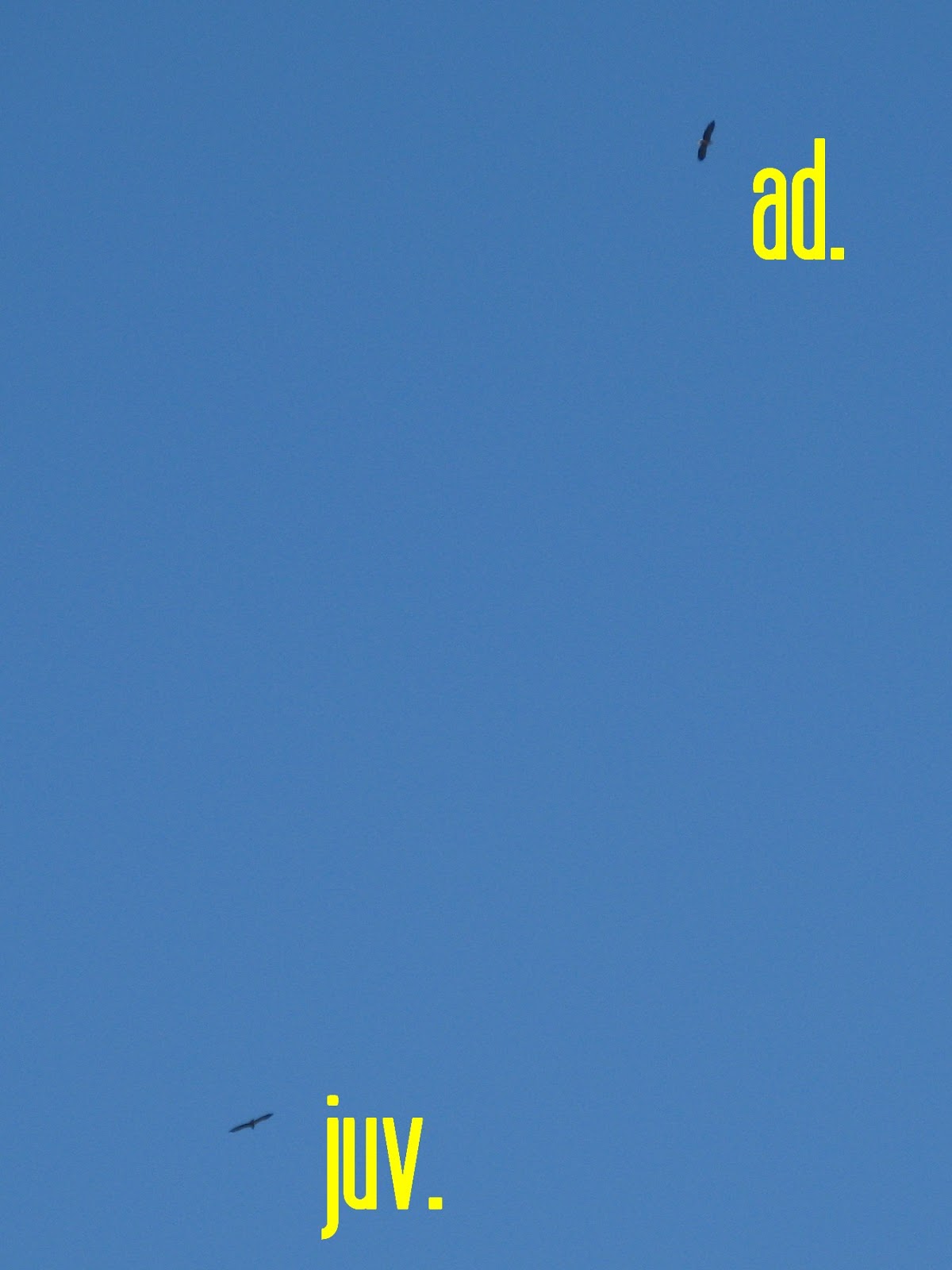 Beautiful adult White-tailed Eagle with glowing white wedge-shaped tail started to soar over my head. In a while another White-tailed Eagle appeared. It was a brown-tailed juvenile. They were soaring together for a few minutes and were slowly flying away from me. After 10 minutes it was all over. 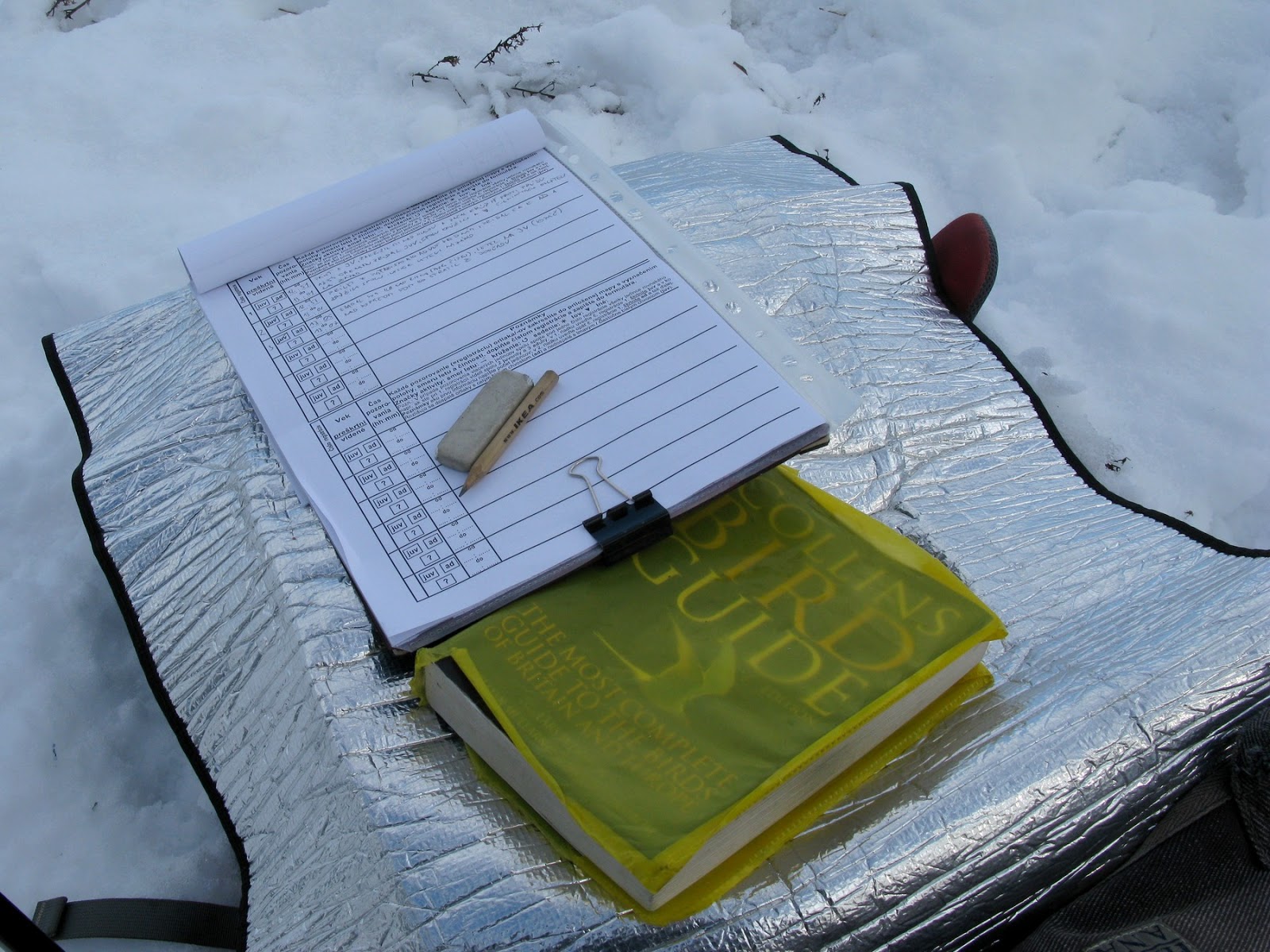 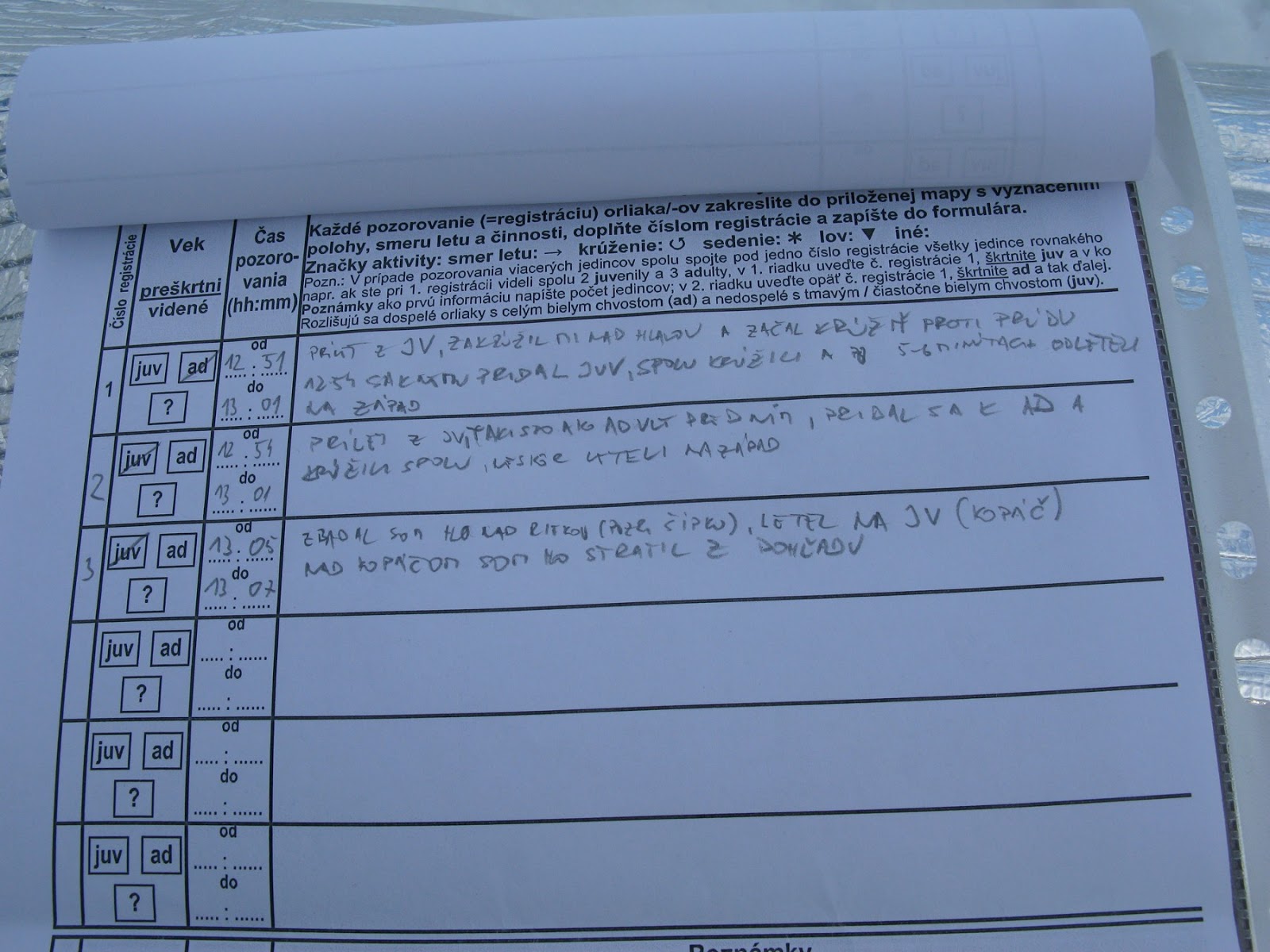 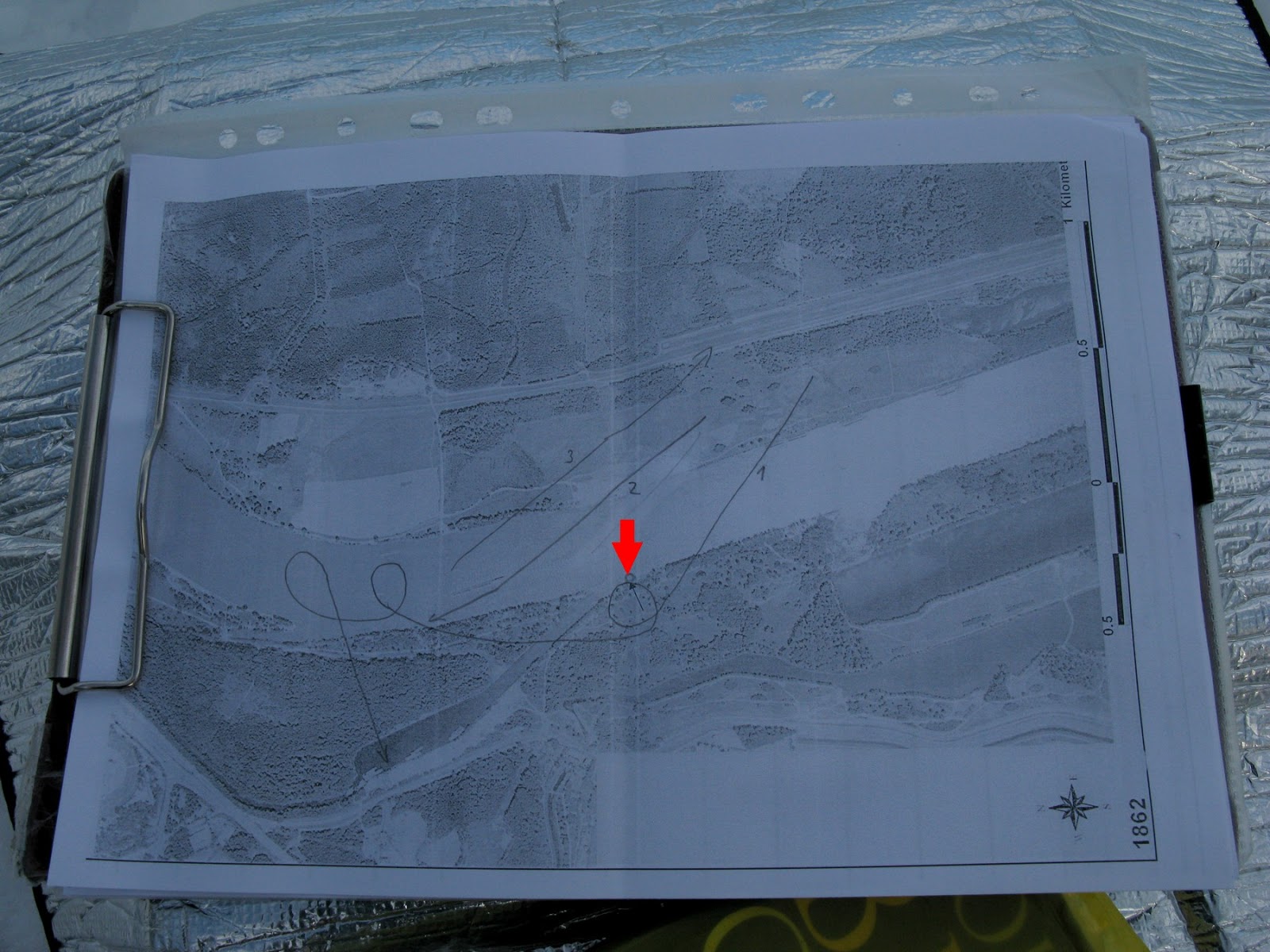 Finally time for writing down some precious data. Juvenile White-tailed Eagle showed itself again in 5 minutes and in a couple of minutes was gone from my sight. (Red arrow shows my observation point)

Bratislava offers plenty of possibilities for birdwatching. One can choose walk in the city parks or around urban lakes. But there is an amazing fact that Danube is a super highway for migrating birds and species such as White-tailed Eagle, Kingfisher, Goosander or Great Egret could be spotted so close to the center of the Slovak capital.
No comments:

It was an ordinary Monday afternoon in Bratislava center. Only plans were to join my friends in wintering Peregrine Falcons count. I was slowly moving towards Most SNP bridge where was my observation point. In the winter several flocks of Black-headed Gulls (Chroicocephalus ridibundus) use to occupy pontoons on Danube. Sometimes accompanied by few Common Gulls (Larus canus). In this case it was just monotonous roosting flock of Black-headed Gulls in winter plumage. 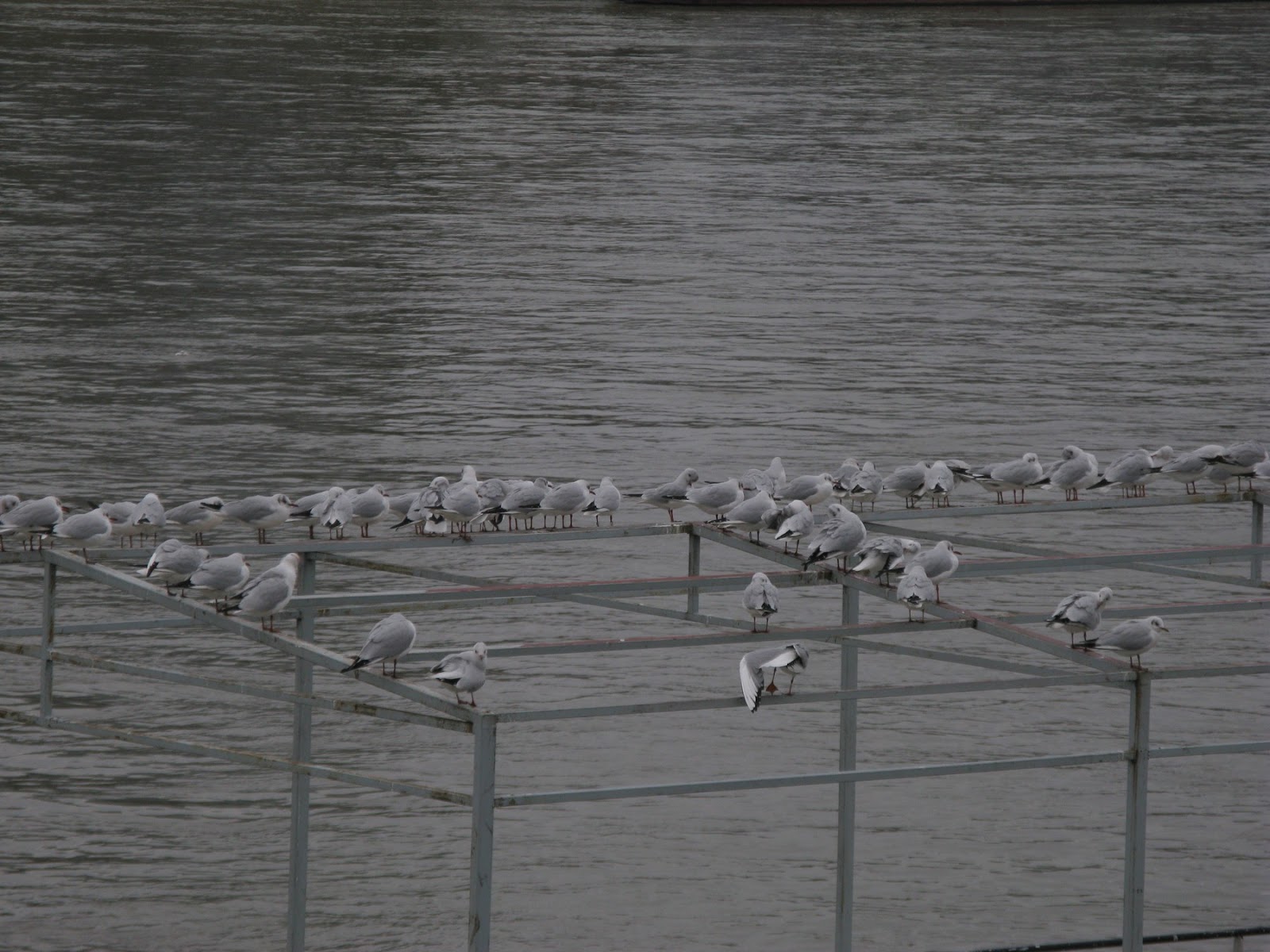 Despite this fact I started to check their legs for rings. Surprisingly I found one in a short period of time. It was an adult with metallic ring on its left leg and white darvic ring with black code on the right leg. It took me a while, but I read the code succesfully - Z41A. 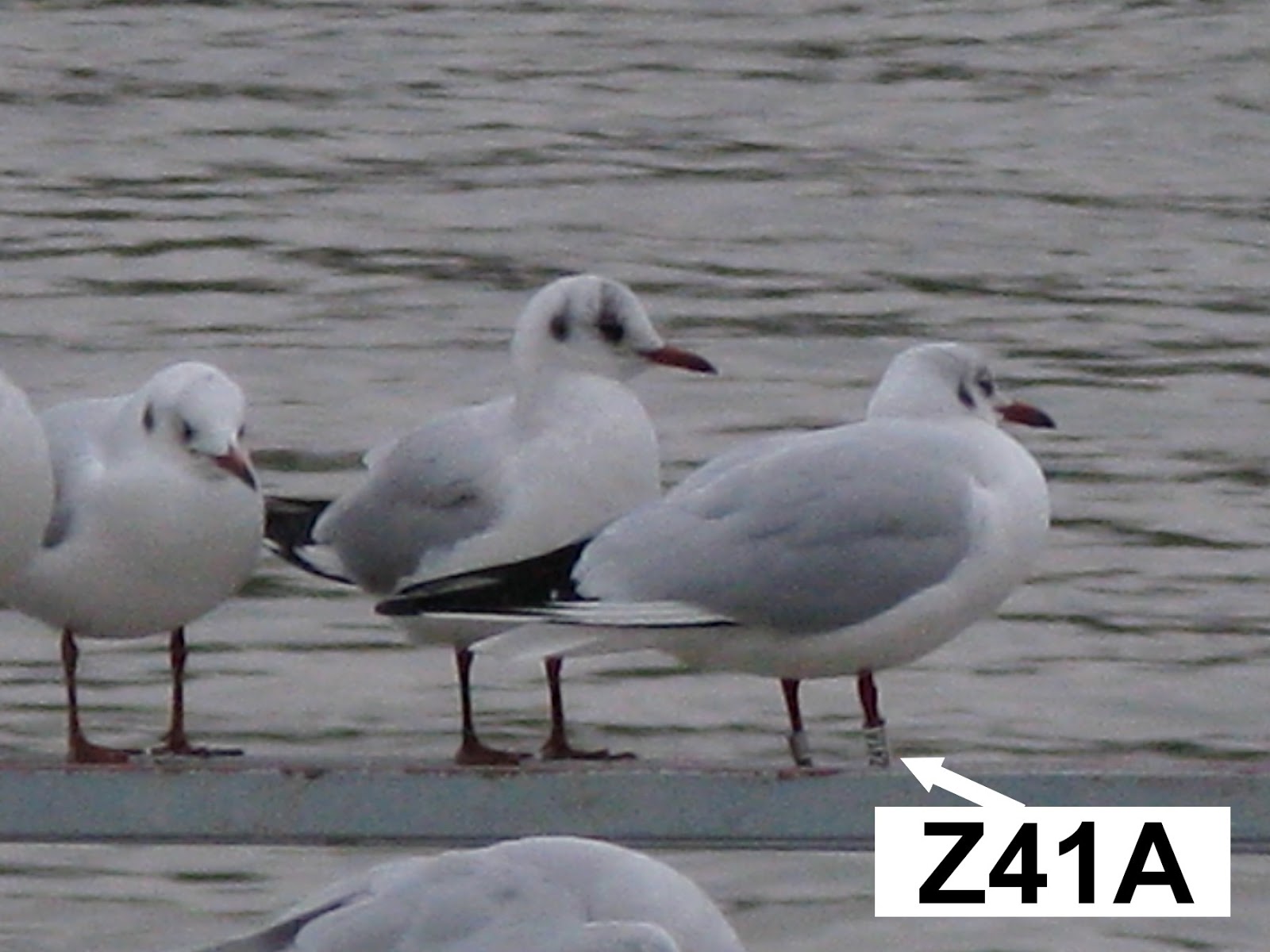 I was already leaving when I spotted another gull with ring. It was really close. I took few record shots and tried to solve the metallic ring as well. The result was interesting. The rings were from Poland as I was able to read "Gdańsk", which is the name of city on the Baltic coast. 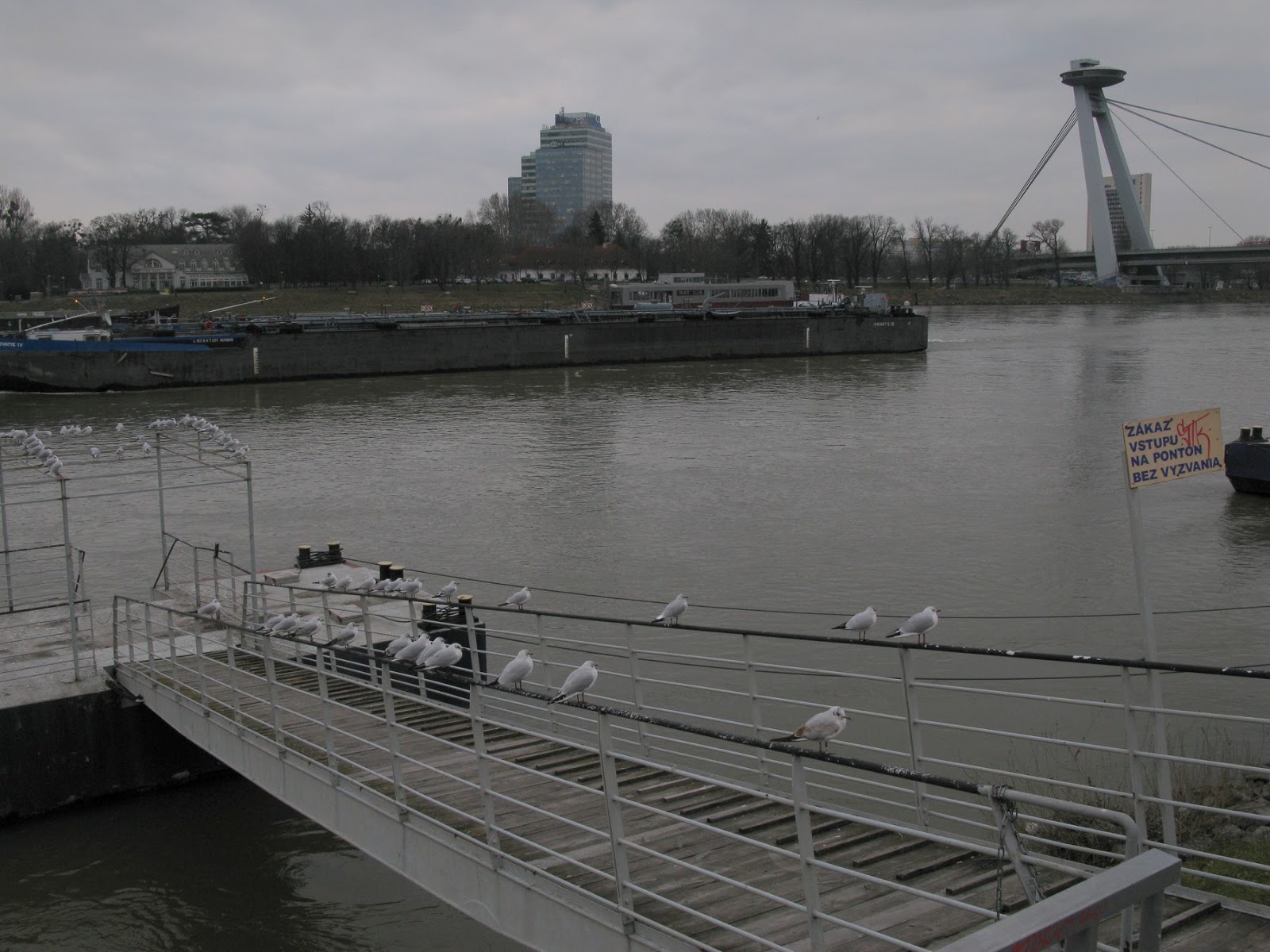 In this case it was a juvenile Black-headed Gull with white darvic ring T26L on the right leg. 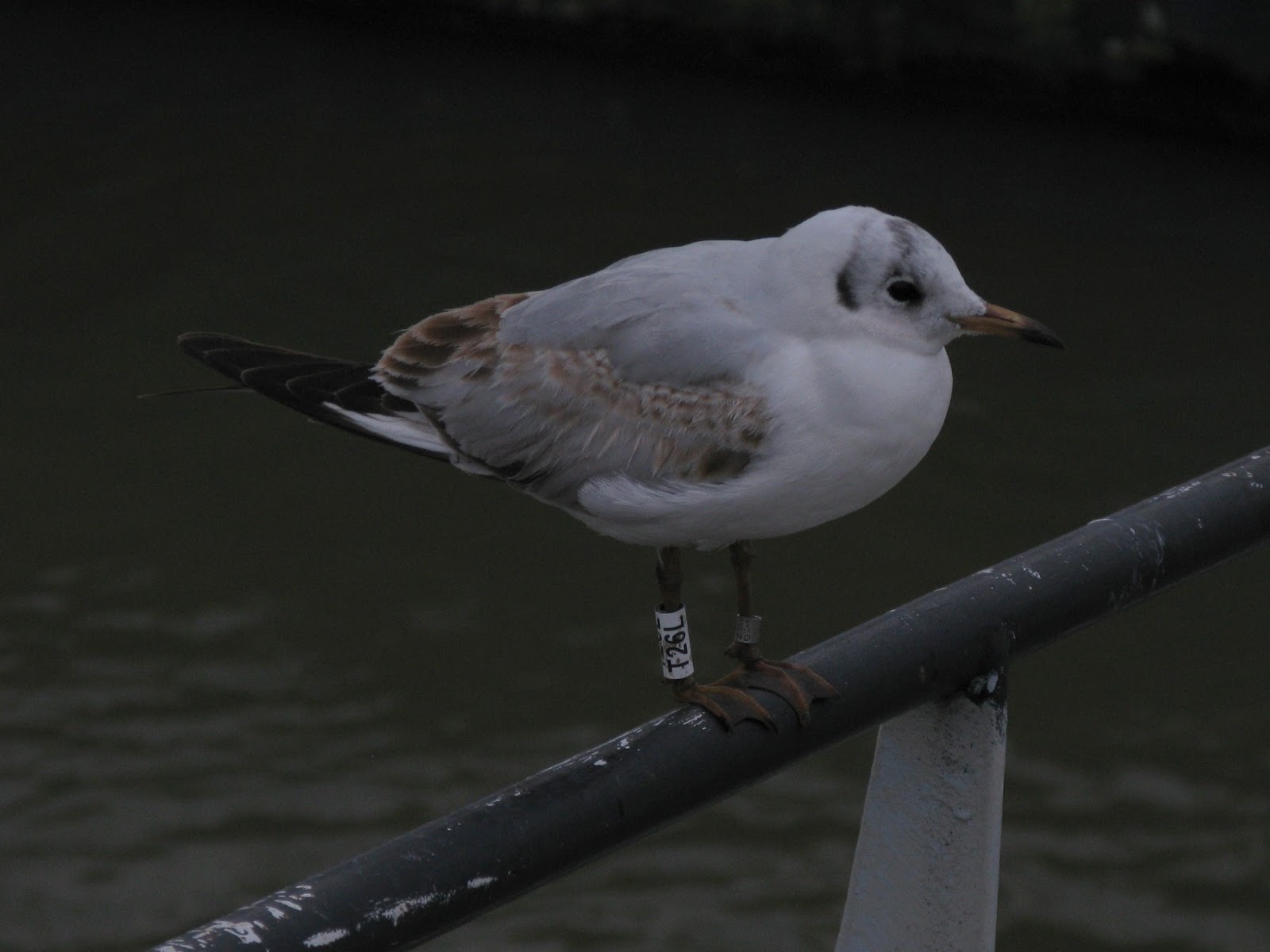 I spent the rest time of the afternoon searching for Peregrines. I found one, but it wasn't on my point so it was "officially" counted by my colleague. Altogether we counted two Peregrine Falcons in Bratislava. 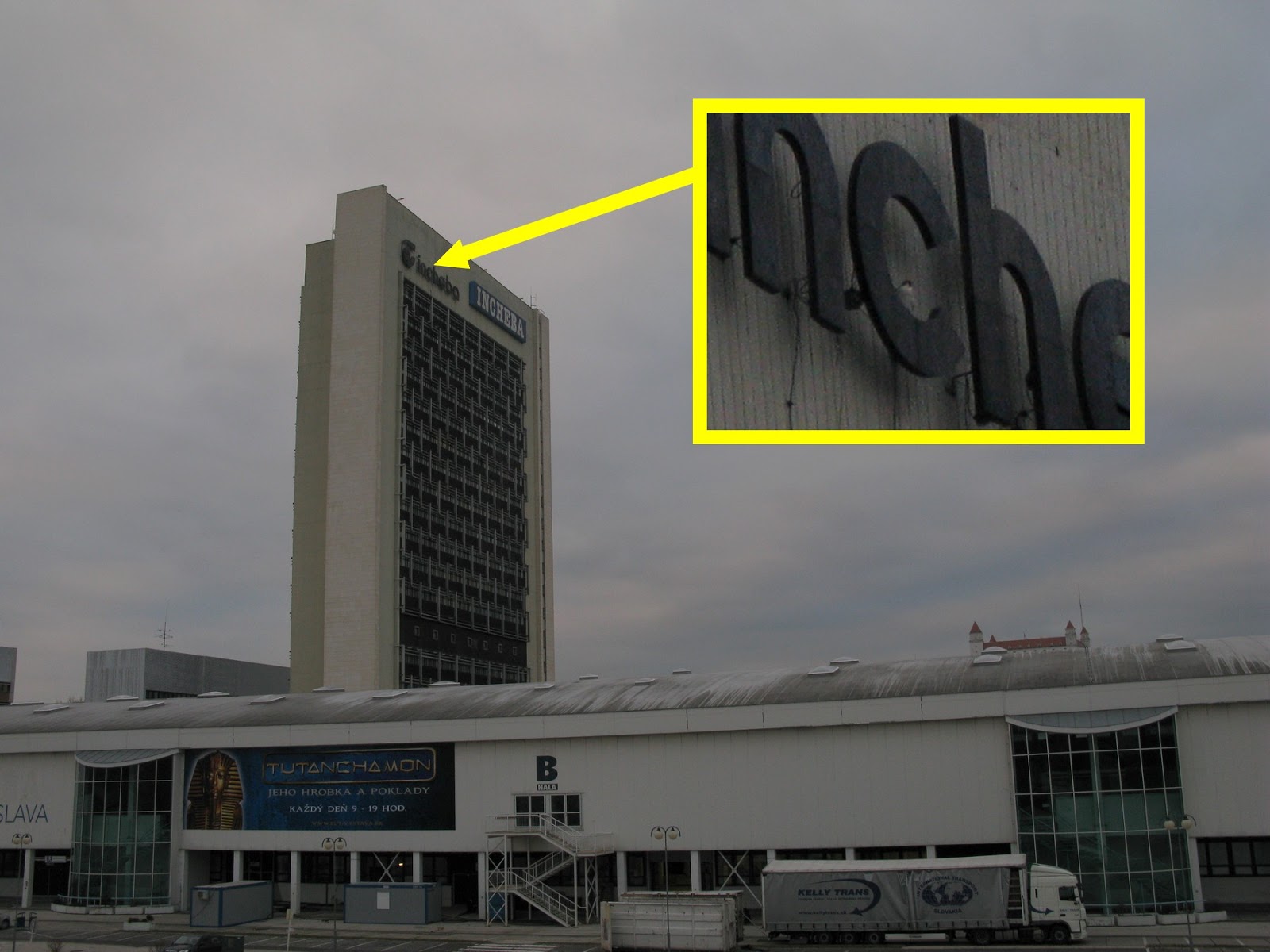 Back to the gulls. When I came home I immediately checked the EURING website for the schemes to send reports about my observations. In few days I received replies.

Z41A was ringed year ago (January 20, 2014) as an adult (3+ years) on River Vltava in the center of Prague, Czech Republic. Interesting fact was that just few days ago (January 8, 2015) this gull was still in Prague. It covered at least 300 km in following days.

T26L was ringed just this autumn (October 1, 2014) as a juvenile in Gdańsk, Poland. Direct distance between Gdańsk and Bratislava is 700 km. It is amazing that these young birds are capable of such long journeys.

These nice observations just gave me an acknowledgment, that it's worth of it to have a closer look even on the common birds. Ringed birds are full of surprises, big stories and fantastic natural journeys.
No comments:

Have you seen Henry? 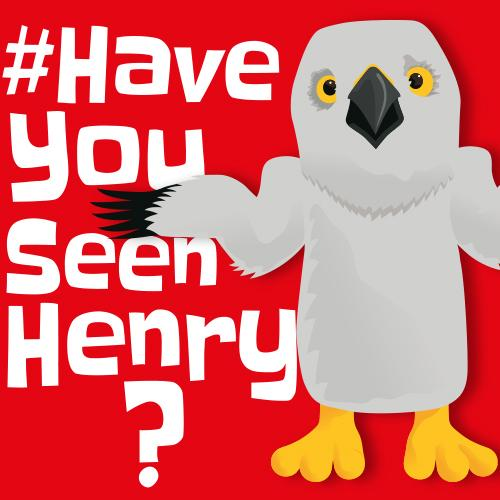 If somebody of You, birders & nature lovers, have plans to visit Bratislava and surroundings, just write me an e-mail (tomas.novak@ymail.com) and we can manage some birdwatching or combined birding & sightseeing walk in Bratislava or nearby area.

Do you like exploring new places. Feel free to contact me if you want to do some bike birding or just want to enjoy Bratislava and its surroundings from different angle.